Read the inspirational stories of our patients in their journey towards recovery. We hope out patient stories inspire you as much as they inspire us

This student overcomes Cancer and then aces her exams as well

Bangalore-based Anoushka Vidudala is quite the ordinary child until of course you hear of the extraordinary fight she put up to overcome Cancer. She not only aced her health but she aced her studies as well with an 8.9 CGPA in her class 10th examinations.

Five years ago, at the age of 12, Anoushka was diagnosed with brain tumor – Medulloblastoma – a Cancer that affects the cerebro-spinal area. She had to undergo a critical surgery at BGS Gleneagles Global Hospitals, Bangalore followed by sessions of chemotherapy & radiation to successfully overcome her Cancer. The intense treatment & radiation therapy left the young child encountering some of the most difficult days of her scholarly life. And yet nothing was ever going to deter her from doing her best.

Post-surgery, I underwent my radiation and chemotherapy sessions. During this period, I was challenged by many situations affecting my motor co-ordination and memory, but I was determined to fight this life threatening ailment,” explained Anoushka.

To begin with, the sickness seemed a routine bout of nausea but she subsequently developed severe headaches that refused to subside. The parents sought various treatments but nothing seemed to help and eventually Anoushka was admitted in a hospital and suggested to undergo an MRI. The MRI revealed a brain tumor and suddenly everything that little Anoushka had ever dreamt off became too distant for her.

Anoushka & her parents, however, refused to let the disease or the treatment come in the way of her dreams.

Even as the news broke out, we had to move on. She was in a critical condition and any delay could have pushed her in coma. Somehow we regained our lost ground and started finding the right doctors for her,  said Anoushka’s mother Meenakshi.

With support from her family, treatment & care from Gleneagles Global Hospitals, and above all with the innate strength and courage that is in her, Anoushka overcome the Brain Tumor. None of these deterred her from her ambitions and she continues to remain a bright student with ambitions of becoming a forensic psychologist.

Back to Patient Stories

Kenyan woman finds the joy of...

The smile of little Lakshay does little to... 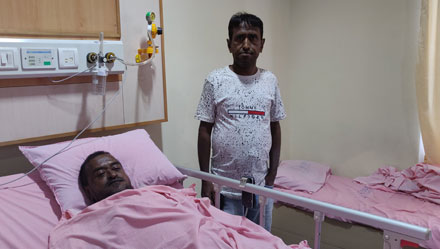 The Case: Arvind was diagnosed with Autosomal dominant...